A Tale of Bliss

Then one day a haggard olde crone collared the boy. “You are ridiculous, dressed like that and dancing in that manner”, she croaked.
“But it makes me feel like Bliss,” whimpered the boy.
“Only those in The Great Queendom of the Feminine can comport themselves such. All know that only girls can dwell in Feminine and explore its great regions such as Burlesque, Pinup, Fantasy & Boudoir, or wield the ancient art of the Sexyselfie,” extolled the crone.

Loathed to admit it, the boy realised the truth in the olde crone’s words. He girded his loins and hatched a devious plan. So it was that the boy became a girl called Bliss du Vie, and I set off to explore The Great Queendom of the Feminine.

On these pages I share with you and offer for sale copies of the amazing images I find there, so you may join me in admiring the beauty of this incredible place.

A Tale of Bliss

Then one day a haggard olde crone collared the boy. “You are ridiculous, dressed like that and dancing in that manner”, she croaked.
“But it makes me feel like Bliss,” whimpered the boy.
“Only those in The Great Queendom of the Feminine can comport themselves such. All know that only girls can dwell in Feminine and explore its great regions such as Burlesque, Pinup, Fantasy & Boudoir, or wield the ancient art of the Sexyselfie,” extolled the crone.

Loathed to admit it, the boy realised the truth in the olde crone’s words. He girded his loins and hatched a devious plan. So it was that the boy became a girl called Bliss du Vie, and I set off to explore The Great Queendom of the Feminine.

On these pages I share with you and offer for sale copies of the amazing images I find there, so you may join me in admiring the beauty of this incredible place.

And this is me when I return… 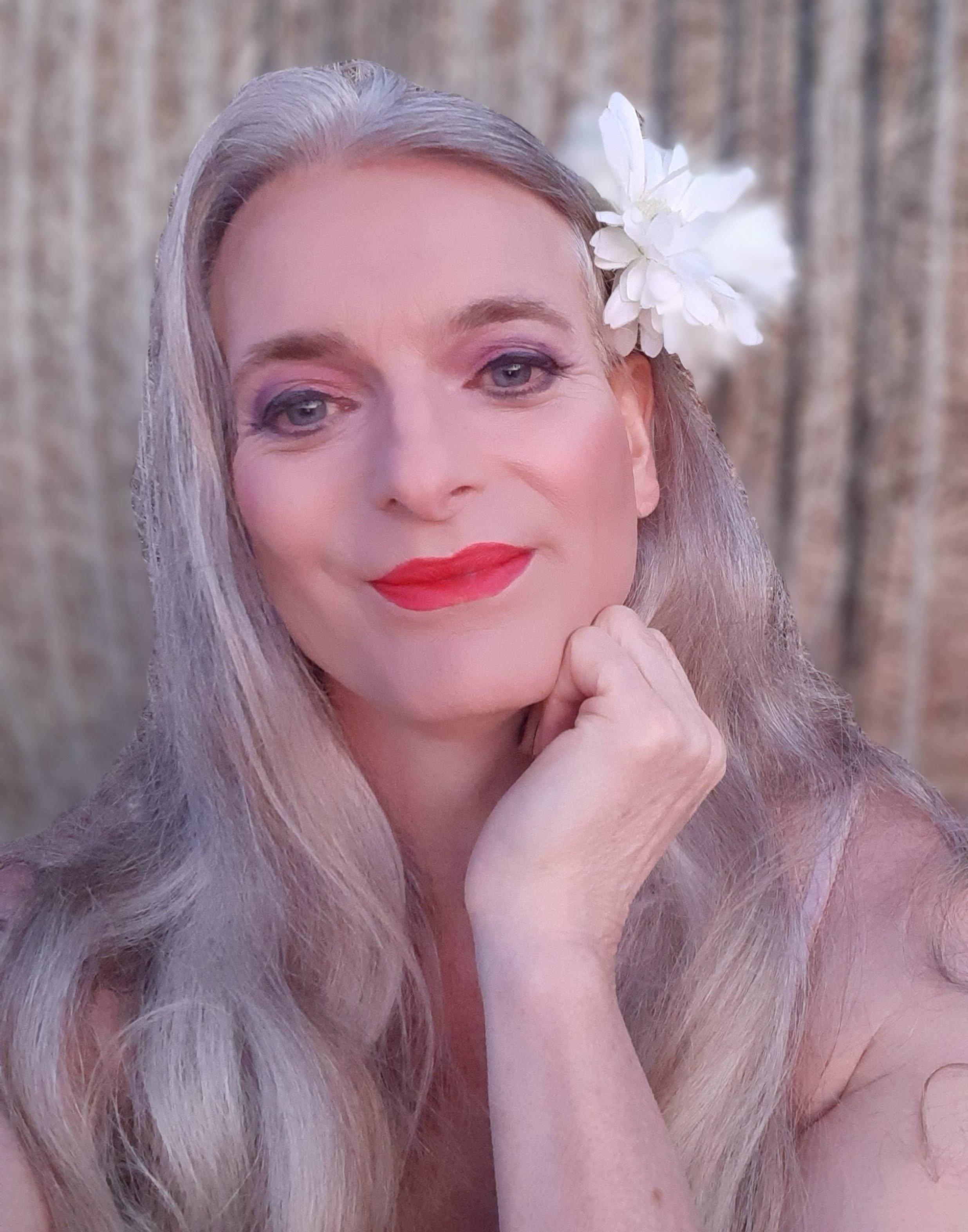 Hi, I’m Bliss, I’m transgender, a dancer, model and performer, but most of all, an artist. The feminine and, by extension, gender has always fascinated me; the beautiful, the fun, the desirable, the dramatic, and the forbidden. I’m based in France and London.

All the images on this site are of me, Bliss du Vie, and are the results of my continuing adventures within the expanse of the feminine, what I jokingly call “The Great Queendom of the Feminine”. In many ways, the above fairy-tale is quite accurate. Like all good fairy tales, the above one is seeded in truth. My artistic travels exploring the feminine might be through the lands of fantasy and performance, however, reality often collides with them.

Although I sometimes replace the background of my images, I try to remain as true to the original image of me as possible. Where I use someone else’s artwork I make every effort to acknowledge them and pass on royalties, although occasionally the rights and credits of images I have used are difficult to trace.

… and you can buy stuff!

On this site, I share and sell my creative work. So come with me on my adventures to the Great Queendom of the Feminine.

My creative life feels like a bizarre patchwork made of threads pulled together from disparate sources. One starting point for my story was a creative dance workshop I did in London in 1990. The workshop was in 5 Rhythms, a style developed by the late American dancer Gabrielle Roth. It was about finding your inner expression and opening yourself to dance and breath. In the following few years, I did over a dozen intensive weekend workshops in the style. Looking back, it was the key that unlocked much of my creativity and sowed the seeds for much that followed.

Two years after that first workshop, I quit my nine-to-five office job and started taking formal dance technique classes. The following year I did a dance foundation course and then full-time dance training at the famous Rambert School in London. I think they took me only because they didn’t have enough boys, which is an irony given who I was to become. During those years I was frequently doing over twenty classes a week and dancing for several small dance companies at the same time. Halfway through the second year, the vice principal told me I would never be a dancer. I was left crushed. With my moral at rock bottom I ended up failing that year but was given a minor certificate for being such a good student.

Although dance training was the first time in my life that I started creating formal works of art it wasn’t until I started working as a model in some of the best art schools in London did I really start becoming a true artist. Most of the work was nude. They loved me because being a dancer, I could hold dynamic poses for them. In some classes, I would move and dance and they would shout ‘Stop!’ and I would hold the position for as long as I could while the class drew frantically.

Those classes taught me a lot about pose and expression, but it was listening to the tutors as they talked about art that inspired me. They would talk about composition, warm and cold colours, negative space and I would listen and soak it all up. In many classes, I felt I became part of the creative process of the students.

Through my modelling work, I ended up collaborating with numerous artists to create performance pieces. In one project I slowly rolled between organic-like sculptures in a Berlin jeweller’s window, almost naked. In another, I was a human bird birthed from bizarre human-sized nests in a torch-lit field during the night.

I worked for about 20 years as a ‘model’, most of which was nude, and often involved movement, so dancing nude doesn’t faze me at all, which is useful as a burlesque dancer.

Meanwhile, around 2000 I formed a dance company with my partner and started creating dance performances where the dancers were immersed in fantastical projected animated landscapes. Transporting a person into another environment has always fascinated me. Inevitably the idea proved too cumbersome for theatre but its influence is very apparent in my current work. During that period of my life, I also worked as a lighting designer for numerous theatre and dance companies. That experience taught me a lot about light, composition and story on the canvas of the stage.

I’ve been fascinated by feminine clothing since I was quite young. I can remember watching a fashion design program on TV when I was probably around six and running to get some paper and sketching out my own design: a long floaty dress with flared sleeves (it was the 70s after all!). In a household where the height of art was the technical drawings of my draftsman father, this artistic expression was quite amazing.

I have always loved the sparkly and the gaudy, so showgirl costumes have always attracted me. By contrast, I find the clothing of every day quite boring. I love colour and prints, the floaty, the fluffy and have a large tutu collection. During my days of expressive dance, I started wearing bright coloured Lycra unitards around London completely untucked (making no attempt to hide the bulge of my genitals). Even though my clothing was quite out there, most of my more feminine clothing I still kept hidden.

By the time I was forty-five, 20 years later, most of the clothing I owned was feminine or unisex. I would wear the unisex clothing in public and keep the overtly feminine garments for wearing in private. But I really loved my feminine clothes. I resolved to be more open and started wearing my tiny minis skirts, brightly coloured tights and boots in public. After all, I reasoned, it’s only fabric tied together with thin string. True, but even in progressive cultures gender and dress code run very deep. Nevertheless, it was a coming out for my clothes, only not for me, not yet!

It took me a few more years to start to wear even basic makeup: eyeliner, lipstick and concealer cream to cover my beard shadow. My dress sense and makeup were starting to concern members of my family. When visiting one family member abroad, just before my fiftieth birthday, they told me not to wear women’s clothes and makeup around the rest of their family.

It triggered a month of soul searching and research to answer that big question: “Who was I”. After weeks of research, I wrote a coming-out letter to them. I was a transgender woman, i.e. a male who dresses and lives like a woman. It didn’t go down well. They told me I looked ridiculous and was self-obsessed. I was at the start of a transition phase and particularly vulnerable and disorientated, grappling with identity and self. I haven’t seen them since. It was one of the most painful periods of my life.

It took two years to really discover the sense of what had been said to me. One simple but devastating word. Shame! It had never been uttered, people are too sophisticated to voice their prejudice so overtly. I had never heard it but had embodied it. I felt shame.

Five Years, One Hundred Letters and Many Responses

So started five years of coming out. I changed my name to Bliss and updated, rewrote and sent that same letter to numerous other friends and family members. I explained the current wisdom behind gender, the difference between sex and gender, how I have always felt feminine. I asked them to call me Bliss and to use feminine adjectives and pronouns when referring to me. I even included some of the less racy pictures featured on this website. Some get it instantly, some reply with messages of support, some ignore it, but others ostracised me, or refused to use my new name and gender. While it has been only a few that have reacted negatively they have been some of the most important people in my life. It knocked by confidence in both family and friendship.  I often find it hard to sleep, sometimes I find it hard to breathe. Occasionally, I wonder if it was worth it. But when I return from my artistic travels with a great image it becomes all worthwhile again.

In 2017 a photographer friend, Robin Hart suggested I pose for her and explore my alter ego. We did two more shoots the next year. On the last one Tasha Brown, a talented makeup artist joined the shoot. Bliss du Vie was born. I was so proud of what we did.

France and a Return to Dancing as Bliss

In 2016 I moved to France and soon after started oriental dance with a video class, later I started ballroom dance. Now I dance at least several times a week. It’s been a renaissance for my dancing spirit and the dancer in me. To find so much culture here in a small rural town has been the biggest surprise about France. At the same time, it’s been been a curious spiral back to that summer workshop in Mile End Road in 1990, where I first fell in love with dance, but this time, it’s as Bliss.

I continue to work in France, in my own studio, and with my own resources. The pandemic has made international artistic collaborations difficult but I continue to explore and post much of my work on my Instagram channel @Blissduvie.

Want to work with Bliss

Are you a creative: a photographer, make-up artist, costume or fashion designer. Do you have an interesting project coming up. I am based in France and London and I’m always interested in collaborating.